Last November, I was fortunate to attend a series of superb performances held at Los Bambinos Trattoria in the Zona Romantica featuring Puerto Vallarta's renowned Latin fusion group, Media Luna. With them for these shows was friend and musician/composer Mauricio (Mao) Zavala, visiting from Mexico City and San Miguel de Allende. His visit was to introduce to the band and the public his new, breathtaking composition called Hasta Que Este Mundo Caiga. We were all blown away by the beauty of the lyrics and the music. They promised to record it together in 2020. Jair tells me it is almost complete, and a video soon will be available for us to enjoy. I have heard the audio portion "in the works" and can tell you it is stunning.

The members of Media Luna, brothers Caleb and Jair Cabrera and their cousin Gibran Monsalvo Cabrera and Mauricio Zavala are originally from Pachuca, Hidalgo. Pachuca, Hidalgo, is 56 miles from Mexico City. High in the mountains at about 8,000 feet, Pachuca and its twin mining city Real Del Monte boast beautiful vistas and, surprisingly, the only Cornish society in Mexico. One of their favorite snacks, "pastes," little meat stuffed tea pastries, is a descendant of an early settlement of miners from Cornwall brought in to revive a declining mining economy in 1824.

The music of Hidalgo combines the huasteco y huapango traditions. The first more structured music and the later more improvised are descendants of 19th-century Spanish fandango and indigenous and African influences. Guitar music, celebrated in Pachuca at the Ramón Noble Guitar Festival, features classes and workshops by renowned international artists as well as a national level competition for classical guitar. It is no surprise that many talented musicians come to us from Hidalgo by way of Mexico City and another music hotspot, San Miguel de Allende. Combining the sounds of their home state with Spanish Flamenco, traditional Latin American waltzes and Afro Colombian music, Media Luna developed a sound of their own. Their popularity with fans from Mexico, Canada and the US is exceptional.

The Coronavirus strain has put a stop to live music, usually so prevalent in Puerto Vallarta. Media Luna is rising to the challenges of producing music during the pandemic by working on new productions in preparation for the next season when we hope to be back to normal.

The production of videos and CDs is tedious and time-consuming work. During a regular season with competing performance schedules and events, it is especially tricky. During times such as we are experiencing now, further complications such as travel, quarantines, and financial stress make the projects somewhat more complicated. Media Luna has its in-house studio, and Jair makes the recording, photography, editing and artistic decisions for the group. He has been swamped during the past months. Earlier this summer, they released an incredible video called Jazzpanguito, one of the best I've seen. I promise to share this new video, "Hasta Que Este Mundo Caiga" as soon as it becomes available. Meanwhile, keep watching YouTube videos and those in your collections and keep these great musicians in your minds and hearts until we all can meet again! 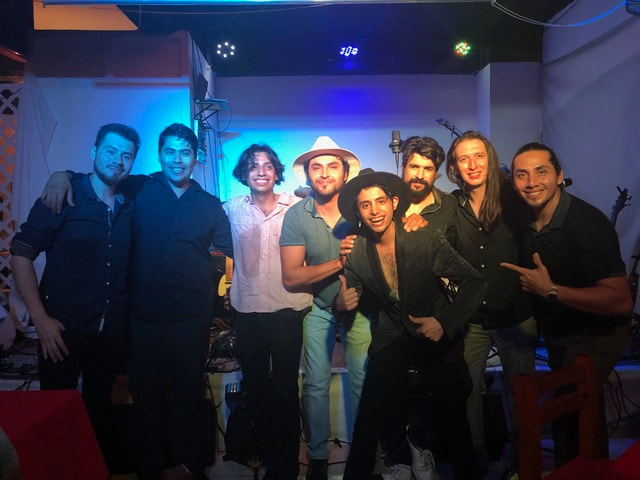