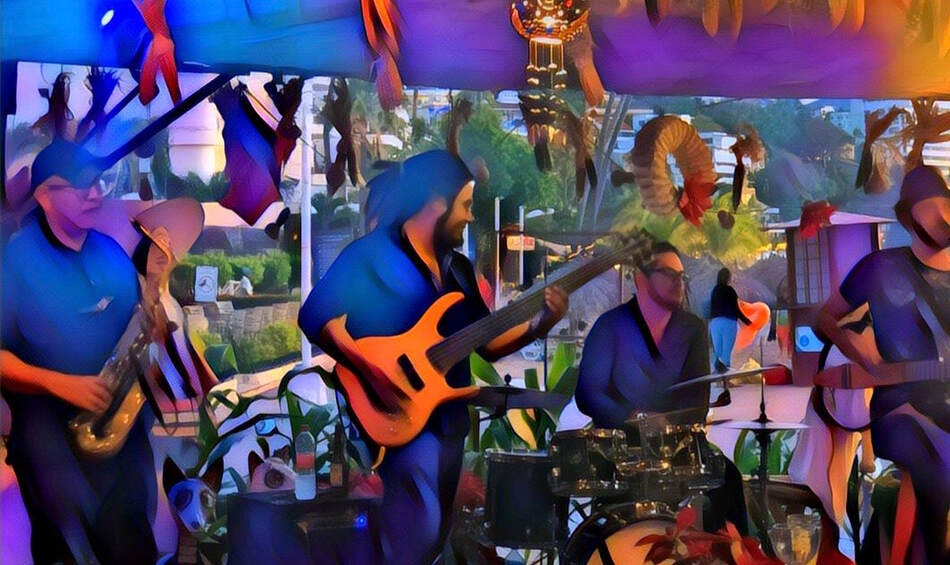 Trem de Minas, a creation of Brian Macedo from Brazil, has really caught my attention this season.  Trem de Minas is a spectacular local musical group that is creating quite a stir these days at Cuates y Cuetes beach front venue in the Romantic Zone of Puerto Vallarta.  The group is made up of Brian Macedo from Brazil on guitar and voice, Roberto Falcón of Ciudad Juarez on bass, Gary Flores of Puerto Vallarta on percussion, and Oscar Terrazas on saxophone.


I asked Brian about the meaning behind the name Trem de Minas and he told me his home state, Minas de Gerais in Brazil, was a famous mining town that used the train to transport its plentiful ore. Nowadays there is only one train car in a central park to remind people of the town's illustrious past.


Brian left his home in the state Minas Gerais—perhaps not by train—for Northern Mexico in the early 2000s to visit his brothers on his way to relocate to London. His plans to live in Europe were interrupted, and he stayed in the North of Mexico. He met Roberto Falcón at a church where he was playing guitar in the city of Ciudad Juárez. Roberto Falcón, primarily a jazz bassist, began performing at the church as well, and soon the two were entertaining at other events together. In 2006 Brian moved to Puerto Vallarta, alarmed at the violence that was spreading in those years in the northern area. Roberto soon joined him, and both have formed many meaningful professional relationships here in Puerto Vallarta.


If you come to Trem de Minas looking only for bossa nova, you may be surprised. Brian Macedo refers to his music as "confusion" music—a mixture of cultures: Mexican and Brazilian, comprised of jazz, bossa nova, and samba. Roberto plays with many groups of various genres and loves the variety. When he met Brian, he became fascinated with the Brazilian sound and soon immersed himself in it. He, too, enjoys the concept of combining their cultures for a unique and exciting musical experience. Soon the two met Gary Flores, a super talented percussionist of like mind, and brought him along. Gary plays with many different kinds of bands from flamenco to jazz and is fascinated by the music they are creating together.

Currently Trem de Minas is only performing in Sayulita but we feel certain we will see them again soon in Puerto Vallarta as the venues open fully.