Last week I watched an excellent film about the life of Miles Davis, a musician I have long admired. It is called Miles Davis: Birth of the Cool and is available on Netflix. The film is quite personal recounting much of his story through interviews with people who were very close to him. It does not try to smooth over his shortcomings, although it does help one understand their origin. The film traces the trajectory of his career from early years growing up in a well to do family in Illinois to studies at Juilliard and performing in New York with his quintet. It traces his move toward classical influences and outreach to the new music of the '80s, including performances with Prince and other Rock legends, up to his love affair with painting near the end of his career.

There is no doubt that Miles could do whatever he set out to do, including breaking away from long term addictions that hampered him during much of his life. The drugs played on his personality, causing breakups of various significant relationships. Despite his ups and downs, Miles covered an extensive amount of musical territory and tremendously influenced music and musicians of his times. He is now considered one of the most influential musicians of all time.

The music of Miles Davis came into my life in the '50s and early '60s with some of his later work, especially Some Day My Prince Will Come and Sketches of Spain. This new and subdued sound, owing to some classical influences, was a real change from the bebop of Dizzy Gillespie and others, based on ever louder and faster-paced music. Miles was not trying to separate himself from bebop but wanted to express softer, more cerebral tones. He was not the only musician involved in this transition but certainly had a significant role in making it accessible. The inspired improvisational Sax player, Lee Konitz, who we recently lost to Covid19 complications, went on to produce an even more extreme form of this subdued music. He, like Miles, was not interested in playing for the audience but for the music itself. Konitz, along with Gerry Mulligan and other artists, joined the Nonet group Miles put together in 1948, which, while it was not the primary purpose of the project, led to the improvisational Cool Jazz style.

Miles was always one to look forward, never back. When his son was starting in music, Miles told him not to look back at the old music he had produced and handed him the music of Prince.

Miles saw himself in Prince, seeing him as a man who always wanted to push his art in new and challenging directions despite what was considered proper. According to an interview for Rolling Stone, for both men, it was all just varying layers of "social music," not jazz, rock and Roll or R and B.

The one time I saw Miles Davis perform in person was in Berkeley, California. I remember he played with his back to the audience. People believed this was due to his arrogance, but now I think I understand that for Miles, the music was important, not the audience. He needed to pull away from that and concentrate on his creation. I recently read an article about reclusive artists who cut themselves off from their public to create the art that is their own. Maybe this is what Miles Davis felt. Lee Konitz is reputed to have said: “My playing was about making a personal statement — getting audiences to pay attention to what I was saying musically rather than giving them what they wanted to hear, which is entertainment".

The music is the message! 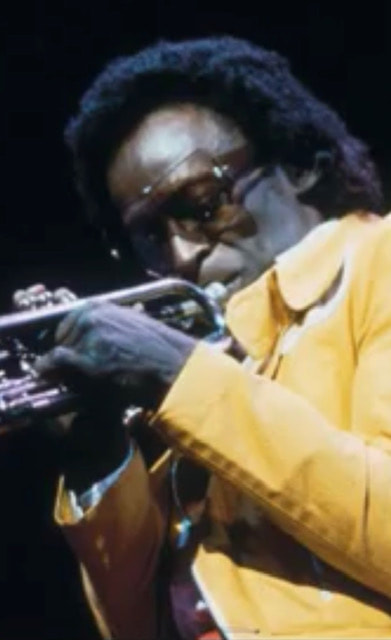