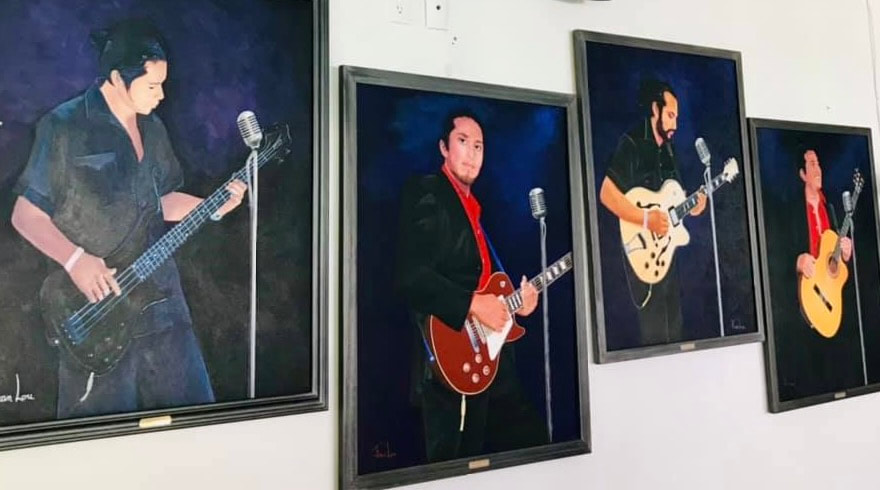 ​Portrait of An Artist: Lazzaro, Immer, Giorgio and Carlos Morales (aka Los Bambinos)

Back in 2005, my daughter and son-in-law held their wedding at Hacienda San Angel in Puerto Vallarta. It was a beautiful affair with many festivities. After the welcoming sunset cocktail party at El Set, many of us dropped down to El Dorado's restaurant on the beach near the pier in the Zona Romantica. There I met a charming group of young men who entertained us with their music as they strolled along the waterfront. They were called Los Bambinos. The youngest of the group was about 14 then. From then on, every trip to Puerto Vallarta was made more special by encounters with the boys as they serenaded crowds in restaurants and the streets.

The brothers Lazzaro, Immer, Giorgio and Carlos are known as the Bambinos. They have been entertaining the crowds in Puerto Vallarta since they were young boys in venues like the Palms and the Roxy. They amassed a huge and devoted following due to their warm personalities and tremendous talents. Noted for their harmonizing, the group specializes in covers of many periods inspired by their father's excellent record collection while they were growing up. They entertain the audiences with Beatles, BeeGees, Frankie Valli and even the Everly Brothers and Queen. On weekends they do a Fiesta Latina with mostly Spanish language pieces. It is a party atmosphere, and guests love to dance and sing along. I have been fortunate to be part of this crowd over the years, enjoying their superb talent and great music. They are considered the best Beatles cover band around!

For several years the group traveled to the Pacific Northwest and wrote some lovely music to honor their experiences, which they turned into a great CD. They toyed with the idea of changing their name to the 4 Morales Brothers, but it seems their fans wouldn't have it. Bambinos, they will remain in the hearts of Puerto Vallarta fans!

Inspired by Giorgio, who studied culinary arts, the group opened their own restaurant/bar, Bambinos Tratorria, now known as Bambinos Bohemia•Cocina•Bar, on Aguacate and Carranza, where they perform up to 6 nights a week to a packed house during the high season. Their devoted fans keep coming back, bringing with them friends and family. Speaking of family, that is how you feel when you join them for their shows. Giorgio personally looks over the kitchen and the talented chef, making certain they offer a delicious menu at reasonable prices. Lazzaro greets you at the door, and Immer and Carlos are always available for greetings and abrazos. You need never feel lonely with the warm and welcoming Bambinos around. For reservations, call 3221163428. Find them at Aguacate 314, Emiliano Zapata, Zona Romántica.